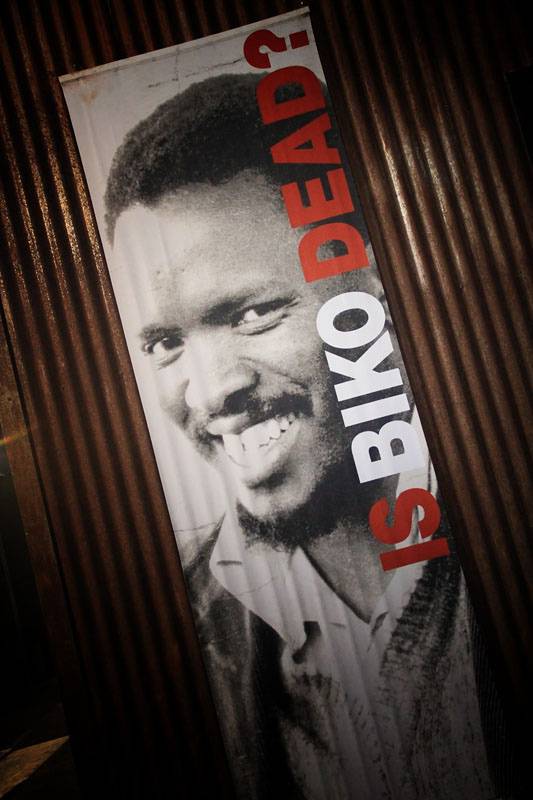 
The Eastern Cape has a proud history of being home to men and women who dared to stand up to the brutal apartheid security forces. Many paid dearly for their sacrifices – but they will never be forgotten, not by their families nor millions of others.

The Red Location in Nelson Mandela Bay is one of the places from where many struggle leaders emerged, and where many were hidden from the police. Port Elizabeth pays homage to them in a number of ways, from public art works to museums, such as the Red Location Museum.

This year South Africa celebrates two decades of democracy, and we remember several Eastern Cape freedom struggle heroes. They include:

Steve Biko, Black Consciousness leader, intellectual and writer, was arrested at a police roadblock on 18 August 1977. He was held under the Terrorism Act and endured a 22-hour interrogation by the Port Elizabeth security police that was so severe, he slipped into a coma. He was later taken to the Walmer police station, where he was chained to a window grille for an entire day. On 11 September 1977, police loaded him into a bakkie (pick-up truck), naked and in manacles, to take him to Pretoria for treatment. He died the next day at the Pretoria prison.

Matthew Goniwe, Fort Calata, Sparrow Mkonto and Sicelo Mhlauli, known as the Cradock Four, were abducted at a police roadblock on 27 June 1985, murdered and burnt. Their charred bodies were later found near Bluewater Bay, Port Elizabeth. Goniwe, a popular teacher and revolutionary, was described as a thorn in the flesh of the apartheid regime. Calata was also a teacher and youth leader. Mkonto was a railway worker and a trade unionist, and Mhlauli was a friend of Goniwe. Their murders were a turning point in the struggle and on the day the Cradock Four were buried, State President PW Botha declared a national state of emergency. It was the beginning of the end for the struggle for freedom, and five years later State President FW de Klerk would unban the African National Congress (ANC) and release Nelson Mandela.

Govan Mbeki, journalist, ANC and South African Communist Party (SACP) leader, Rivonia treason triallist and father of former President Thabo Mbeki, spent his last years living in Summerstrand, in Port Elizabeth. The ANC leader had spent 24 years on Robben Island, after being convicted in the 1964 Rivonia trial with Nelson Mandela and several others. Oom Gov (as he was fondly known) is buried in Zwide cemetery, along with fellow struggle stalwart and Rivonia triallist Raymond Mhlaba. 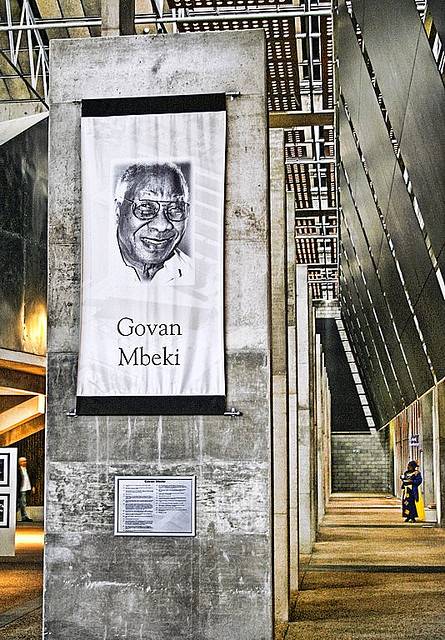 Govan Mbeki, an icon of the struggle, and one of Nelson Mandela's friends and confidants. Photo courtesy of max_thinks_sees

Raymond Mhlaba was first arrested for leading marchers into the "Europeans Only" entrance at the New Brighton train station in 1952, during a transport strike that formed part of the Defiance Campaign. When the ANC was banned in 1960, Mhlaba, an SACP and ANC leader, went into exile. While in exile he received military training in China and returned to South Africa two years later to lead uMkhonto weSizwe (MK), the ANC's armed wing. Mhlaba was one of the Rivonia treason triallists, and along with other ANC leaders including Nelson Mandela and Govan Mbeki, sentenced to life imprisonment. He was released in October 1989 and went on to become premier of the Eastern Cape, after the first democratic elections in 1994.

Mkhuseli Jack was a boy when he moved from Humansdrop to Port Elizabeth, and it was here that he learned about apartheid and became politically active. He was a student leader and was instrumental in launching the Port Elizabeth branch of the Congress of South African Students (Cosas). Jack was arrested, jailed and placed under banning orders numerous times, including while he was writing his matric exams in 1979. In 1983 he launched the Port Elizabeth Youth Congress (Peyco), and became involved in a number of resistance campaigns, including consumer boycotts, stayaways, and the United Democratic Front's (UDF) Million Signature Campaign, against apartheid and the tricameral parliament. He also campaigned in 1984 for people to not vote for the tricameral parliament, established by the apartheid regime to give coloureds and Indians a small say in government. Jack broke away from the ANC in 2008 and joined the newly established Congress of the People.

Janet Cherry established the Eastern Cape Adult Learning Project in 1984, when she moved to Port Elizabeth from Cape Town. Under the 1985 state of emergency the literacy programme could no longer operate, and Cherry became heavily involved in a crisis information centre, supporting the familes of people who had disappeared or been detained. Cherry was detained in 1985, 1986, 1987 and 1988, before being put under house arrest in 1989. She helped to set up the UDF’s Million Signatures Campaign and in December 1984, she and Molly Blackburn formed the Port Elizabeth branch of the End Conscription Campaign. Cherry was arrested in 1986, and an international campaign to release her included calls by Senator Edward Kennedy, Bishop John Walker of Washington DC and Bishop Paul Moore of New York, who wrote to President Botha calling for her release. Cherry is now a senior lecturer at the Nelson Mandela Metropolitan University in Port Elizabeth, in the Department of Development Studies.

Florence Matomela, angered by new influx control regulations, led a demonstration in 1950 that ended in women burning their passes – issued to black people, allowing them to be in "white" areas for work. During the 1952 Defiance Campaign she was one of the first women to work on the campaign, but was arrested on a charge of civil disobedience and spent six weeks in prison. Matomela was an organiser for the African Textile Workers Union in Port Elizabeth, a member of the ANC and MK, treasurer of the South African Congress of Trade Unions (Sactu) and an accused in the 1956 Treason Trial, but these charges were later dropped. A diabetic, during her imprisonment she was often denied her insulin injections, and was not told when her husband died. Over the years she was arrested and banned a number of times. Matomela died in 1969, while under banning orders. 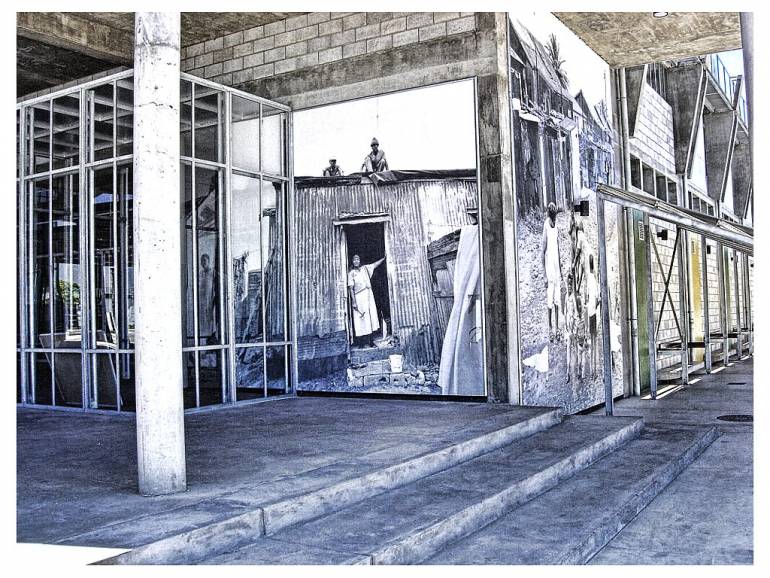 The Red Location museum is a huge repository of struggle history. Photo courtesy of max_thinks_sees

Wilton Mkwayi was an organiser for the African Textile Workers Union in Port Elizabeth in the early 1950s, and later served as treasurer of Sactu. He was a leader of the 1952 Defiance Campaign, and an accused in the 1956 Treason Trial. After fleeing South Africa in 1960 and undergoing military training in China before slipping back into South Africa, Mkwayi was arrested and prosecuted in what became known as the Little Rivonia trial, for furthering the aims of MK. He was sentenced to life imprisonment on Robben Island, and was released after 24 years in October 1989. Mkwayi served as a member of Parliament from 1994 until his death in 2004.

Sipho Hashe, Champion Galela and Qaqawuli Godolozi, known as the Pebco Three, were members of the Port Elizabeth Black Civic Organisation (Pebco). They vanished from the Port Elizabeth Airport on 8 May 1985 and for years there were strong suspicions that the security police had had a hand in their disappearance. In November 1997, testifying before the Truth and Reconciliation Commission, notorious security policeman Colonel Gideon Nieuwoudt confessed that he had taken part in murdering the Pebco Three. Nieuwoudt had lured them to the airport by getting a paid police informant to pose as a British embassy official who wanted to donate money to Pebco. Instead, on their arrival at the airport they were apprehended by the security police and taken to an abandoned police station near Cradock. They were interrogated, stripped, beaten and strangled. Their bodies were burnt, and their remains thrown into the Fish River.