Tomorrow will be an extraordinary day as we, for the first time since his passing in December 2013, honour our global icon, Nelson Mandela.

Nelson Mandela Bay Tourism has identified the South African Marine Rehabilitation and Education Centre (Samrec) as a beneficiary of our 67 minutes of service. 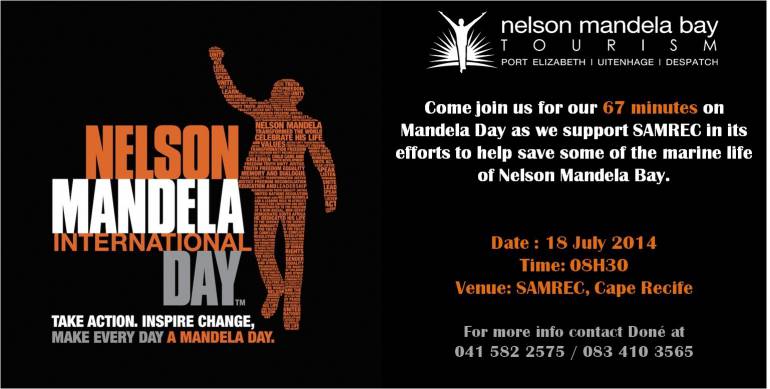 Nelson Mandela Bay Metro, which includes Port Elizabeth, Uitenhage and Despatch, is the only South African city privileged to bear Mandela’s name. “It is through Mr Mandela’s leadership, sacrifices, devotion to humanity and humanitarian causes that we are able to live not only in a city of freedom, but [be part of] an entire nation which has been liberated. It is for these and many other reasons that we will continue to salute and thank Madiba by implementing these legacy campaigns,” says Mandlakazi Skefile, CEO of Nelson Mandela Bay Tourism.

Nelson Mandela Bay Tourism has identified the South African Marine Rehabilitation and Education Centre (Samrec) as a beneficiary of our 67minutes of service. Every year on July 18, Nelson Mandela International Day, millions of people across the world volunteer 67 minutes of their time to help people less fortunate than themselves.

Nelson Mandela International Day was launched via a unanimous decision of the United Nations General Assembly on 18 July 2009. It was inspired by a call Nelson Mandela made a year earlier, for the next generation to take on the burden of leadership in addressing the world’s social injustices. At the time Mandela uttered the motivational phrase: “It is in your hands now”.

Samrec is a rehabilitation centre for marine life and plays a vital role in educating the youth about the environment. We have helped to raise money to buy much-needed solar panels as Samrec’s electricity consumption is one of its biggest costs and Samrec was on the verge of closing down. Since the doors first opened in 2000, it has grown to include the Samrec sea school which offers educational programmes to schools, clubs and other institutions in the region.

Samrec sea school teachers also visit rural and urban schools to teach children and their teachers – who might not otherwise ever learn about the ocean – in a virtual marine setting. The Samrec Centre is an exciting and attractive tourist attraction, recently being named top tourist attraction in Port Elizabeth by the TripAdvisor website.

Due to high running costs, especially electricity consumption, Samrec is danger of shutting up shop. To prevent this from happening Samrec has decided to “go green” by installing solar panels. Approximately 120 solar panel kits are needed to make them independent of the electricity grid and enable the centre to be self-sufficient.

About R66 000 has been raised by NMBT and Samrec through various donors and sponsors. Tomorrow 12 panels will be installed thanks to:

Libby Sharwood of Samrec says, “We are extremely grateful and happy to all who contributed to the start of the solar panel installations as this will go a long way towards reducing the electricity bill and running costs of the centre.”

Skefile will hand over a cheque of R66 000, after which everyone will pitch in to paint and upgrade some of the facilities. An orange “stone sun” will be built next to the penguin pool. In the spirit of Madiba and his vision to spread social justice and freedom for all, take the opportunity to become a part of a continuous global movement for good.

As Madiba once said, “It’s in your hands to make a difference.”